The most exclusive camp in the Lamai

The most exclusive on the Indian Ocean

Signature Cape Town
One of the world’s most beautiful cities

Surrounded by Table Bay, Table Mountain, Lion’s Head and Devil’s Peak, it is here among the art deco buildings, the hustle of the open air markets and the side-walk cafes that you will experience at first hand the history and variety of culture that the Cape has to offer.

From the start of the “green season” in winter to the festivities celebrating the summer, Cape Town is a city that is big on culture, serving as ambassador to South Africa’s unique heritage. The city’s social calender is crammed month after month with must-see events from concerts in internationally renowned botanical gardens to sporting events of a global scale, to wine and cheese festivals strung out along one of the most scenic coast and valley routes in the world. Venture further afield out of Cape Town on to the garden route and you’ve got flower fields, whale watching and some of the world’s most beautiful hiking terrain.

Oceans, mountains, vineyards, beaches and a rich, cultural vibrance.
Everything you could desire is combined in a naturally beautiful setting.

Take the revolving cable car (one of the most advanced rides of its kind in the world) up Table Mountain and walk it’s flat top trails for 360-degree views of the Cape in its entirety – from downtown, all the way to the Winelands.

A few minutes drive away from the working harbor the Atlantic seaboard turns to creamy sands from Clifton beach to Camps Bay, where the streets turn into palm lined promenade strips with ice-cream bars and sushi-cocktail lounges.

Chapman’s Peak is a 600m winding scenic drive carved out along the steep mountainside offering spectacular ocean views and, in season, some fabulous whale watching. On through the pastures and Milkwood forests of Tolken’s fantasies, past the historic South England-reminiscent naval towns with Penguin colonies, you’re upon the Cape Point Nature Reserve home to even more stunning coastal views, tumbling cliffs, and spring flower meadows frequented by baboon and zebra. Heading back toward the wine-growing suburbs of Constantia, Kirstenbosch Botanical Gardens are a botanist’s haven the world over with more than 22000 indigenous plants.

The picturesque area of the Bo-Kaap is criss-crossed by cobbled streets and lined with crayon colored houses and mosques. Originally inhabited by slaves from India, Madagascar and Sri Lanka, the area retains a distinct flavor all its own.

Where to Stay: Hot Picks 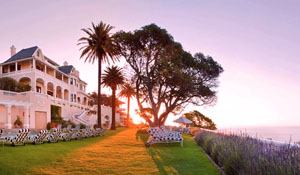 A boutique hotel set in the seafront of Bantry Bay, overlooking the Atlantic and Robben Island, this is the most enviable address in Cape Town to explore it all from. Relais & Châteaux.